The long history of Talavera House of Prayer – Recoletos (THP-R) was revisited by both incumbent and former administrators of the retreat house together with the Josenian community earlier today, May 30. 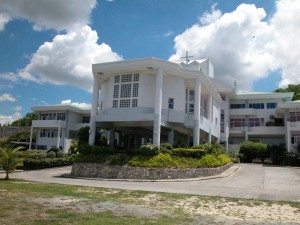 THP-R is a facility located on a hill in Barangay Quiot, Cebu City. It is primarily used for group retreats and other religious events.

Buñao was the university president when THP-R was inaugurated on May 30, 1998. He was also the first director of the retreat house.

Today marks the culmination of the 20th year celebration of THP-R as well as the start of its 21st year.

An outreach activity was also led through the university’s Institute for Non-Formal Education and Community Outreach Program (INFECOP). Games and treats were prepared for the children in Barangay Quiot as one way of sharing the blessings received by the Josenian community in the past two decades.

A cultural show which highlighted a look back on how the Talavera Project began concluded today’s celebration.

In a written account, Fr. Buñao recalled the events which led to the construction of the facility. He said it started with “a felt need.”

He narrated that he was appointed President of USJ-R in August 1988.  Upon assumption into office, the academic community of the University shared with him their expectations and concerns.  The Campus Ministry Office (CMO) and the Center for Religious Education (CRE) expressed the desire to have a retreat house.

“They said that to effectively carry out the evangelization program for the students and the rest of USJ-R  personnel, the university should have some off-campus facilities to support and complement their class activities,” he told USJ-R.

Talavera through the looking glass

The prayer house was named after Talavera de la Reina, a city in Spain which is home to a monastery for Augustinian Recollect friars who live a contemplative life.

The project was launched on December 5, 1996. The construction of the edifice in Cebu started in March 1997. It was inaugurated in 1998 which marked the 50th year of USJ-R as an institution. After three months, its operation commenced.

Before the efforts of the administration came to fruition, challenges were also met along the way.

“We learned also that the past administration had the interest to acquire the said property but the plan was abandoned for some reasons,” Fr. Buñao recalled.

He continued that the road right-of-way was a problem and there was no access road leading towards the property. The configuration of the property also called for costly and massive development activities. Moreover, the place was known as the killing fields during the early 1980’s because from time to time human bodies (believed to be victims of salvaging) were thrown into that unpopulated and isolated place.

As the years went by, the obstacles were gradually addressed. Integrated in the deed of sale was the contract of perpetual use of the road right-of-way. Chief Justice Marcelo Fernan also allocated P4 million from his pork barrel for road improvement projects through the Department of Public Works and Highways (DPWH).

“To all those who dreamed for a retreat house… the efforts and the money invested in Talavera are now returning and paying off with the thought that something beautiful has been done for the greater glory of God,” Fr. Buñao concluded.