The College of Nursing (CON) celebrated its fifteenth anniversary of offering pre-medical courses on January 31 this year.

It is the youngest college in the University of San Jose – Recoletos (USJ-R). It began accepting enrollees in April 2004 and had 1, 027 students during its first semester. All of which are nursing students.

In 2007, the college was awarded full government recognition by the Commission of Higher Education (CHED). In the same year, a 100% passing rate was achieved by the first batch of graduates who took the Nursing Licensure Examination (NLE).

Over the years, the college continuously produces globally-competent graduates.

Dr. Audrey Verano, dean of the CON, said in an interview that the students of the college are closely monitored and guided to maintain quality education. She also added that the college also have a top-notch skills laboratory for simulations in preparation for the students’ on-field duties.

A testimony to this is when 100% passing rate was duplicated in November 2018 when all takers, all of which are first timers, passed the NLE.

To commemorate this milestone, a eucharistic celebration was observed at the main campus and a two- day event was organized by the Nursing Student Council (NSC) with the theme, “Soaring High at 15 through Excellence”. It aimed to unite all nursing students amidst their decreasing number at present times. 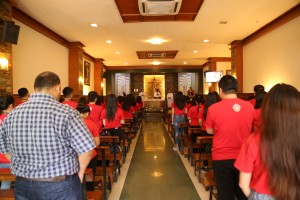 Students and faculty members of the College of Nursing attend a eucharistic celebration during the kick-off of the CON’s 15th anniversary.

After which, a ribbon cutting at the main lobby was done to formally start the activities prepared for the event and the opening of an exhibit which features the history of the college, its achievements, past deans and NSC presidents.

When asked about the challenges faced by the organizers in preparing the event, NSC President Mike Laurence Carpentero said that the organizers had a hard time finding participants to join the activities due to their small community. In response, NSC asked help from their clinical instructors to encourage their students to attend. He added that the budget, and the pressure of high expectations were among the challenges that they faced.

On the last day of the event, an alumni homecoming was held to coincide with the celebration. It also included the awarding of the college’s dean’s listers. The organizers prepared various activities to entertain the guests such as Maria went to OR and Project Runway: Nursing Edition to name a few.

The event was also attended by the University President, Rev. Fr. Cristopher C. Maspara, OAR, who delivered an inspirational message.

Carpentero envisions the college to become a Center of Excellence in Nursing in five years time. Meanwhile, Verano shared that CON is processing its papers for them to offer a degree program on medical technology in the coming years.