The rite of renewal of religious vows was presided by Rev. Fr. Leopoldo Estioko, OAR. It was done in time for the six’s 25th Sacerdotal Ordination Anniversary and 30th Anniversary of Simple Profession of Vows. 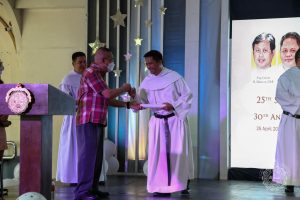 One of the formators of the jubilarians, Fray Joseph Philip Trayvilla, OAR, gave the homily and addressed a message to the six priests.

“My dear jubilarians, God’s grace has been sufficient and will always be sufficient for us. Mao na nga ania pa ta,” he said.

The Holy Mass was followed with the taking of pictures of the priests with their family and friends.

Then, a short program came after at the USJ-R main lobby. To cap off the event, a handwritten scroll from Vatican was given to each of the jubilarians.