OAR Prior General visits USJ-R, invites Josenians to be creators of communion

The highest official of the Order of Augustinian Recollects (OAR) encouraged the Josenian community members to be creators of communion during his visit at the University of San Jose – Recoletos (USJ-R) on February 21.

Prior General Fray Miguel Miró of the OAR expressed this in front of the administrators, teaching and non-teaching staff of the university as well as guests from the Augustinian Recollects (AR) sisters.

To recall, Pope Francis said in a conference with Augustinian Recollects in October 2018 at Vatican City that being creators of communion meant to to create a society capable of recognizing the dignity of each person and of sharing the gift that each one is for the other.

Fr. Miró was the guest of honor for the Recoletos Youth in Mission (RYM) at the Center for the Performing Arts which was participated by OAR-affiliated organizations and institutions. The resource speaker for the activity, Rev. Fr. Antonio Carrón of the OAR General Secretariat for Education, talked about Augustinian Pedagogy before the prior general gave his speech. 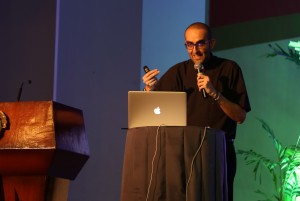 Rev. Fr. Antonio Carrón of the OAR General Secretariat for Education talks about the Augustinian Pedagogy and shows samples on how to integrate new technologies to make classroom teaching more interactive.

The Prior General stressed some points presented by Fr. Carrón. One of which is that the OAR intends to reaffirm the institutional educational project of the Order.

“It is important that as a religious family, we continue to grow as an educational network, sharing our experiences from a cultural richness. This is one of the major objectives of EDUCAR, the international Augustinian Recollects educational network,” said the Prior General.

He continued that the OAR has also acknowledged the concern on that there have been cases where the vulnerable like minors have become objects of abuse.

“We invite you to work with us to create new structures that ensure the minimization of risks,” he added.

To protect the vulnerable, OAR has made aware the RYM attendees that the Order has the Commission for the Protection of Minors to look into cases of abuse within the Recoletos community.

USJ-R is only one of the many Recoletos communities which Fr. Miró will visit here in the Philippines under his “Visita de Renovación”. The main purpose of the visit of renewal is to know the state of the community, to reaffirm religious life more fully and the charity and unity among the brothers, as well as to correct any abuses as stated in the OAR Constitutions 464.

His series of visits in the country started on February 12 and will end on March 25. After which, he will return to Rome.