A group of Josenian IT students is developing a mobile application which can help drivers find proximate parking spaces and its corresponding rates.

The application is called Car Space. Its proponents are Jesury Thomas Gadiane, Kevin Cerdon, and Noel Daniel Seldura. The three of them are second-year Information Technology students at the University of San Jose-Recoletos. 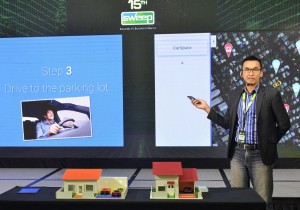 In behalf of the team, Noel Daniel Seldura presents to the Smart Sweep judges the concept of Car Space and how it can help address parking woes.

In the parking lots, an ultrasonic proximity sensor is installed. It has a light bulb which turns green if the parking space is available and turns red if the lot is occupied. It works similarly to the common valet parking areas in the city but with something more through the use of Internet of Things (IOT).

Real-time data about the parking lot’s availability is sent to the Car Space system through wireless technology. It is then made available to the drivers who have an internet connection to access the mobile app.

Gadiane said that Seldura and he are drivers. Finding a parking area is one of their daily woes which inspired them to come up with the app.

Eric Magto, the team’s adviser, said that Car Space is not yet deployed and fully functional at present. It is still in its “mock app” stage. Despite this, the concept of Car Space and its existing model already gained recognition in the national arena.

On May 10, Car Space was proclaimed champion in the Smart Sweep Awards. They bagged a cash prize of P300,000.

Magto is looking forward to participating in higher level competitions together with Josenian IT students. In preparation for that, the College of Information, Computer and Communications Technology (CICCT) has formed groups in their different year levels and has provided supplemental mentorship programs for the students.

CICCT Dean Gregg Gabison said that USJ-R maximizes its resources to support the researches of their students to develop their ideas on how to use technology to make the world a better place to live in.