After over two years, the University of San Jose-Recoletos once again opened its classroom doors to students for face-to-face classes starting September 12.

The Josenians in the tertiary level were greeted with an opening salvo dubbed “Sugod” and were given treats. They also wrote their expectations for the new school year, which will be buried in a time capsule. Traditional school bell tunes also rang throughout the campus.

The USJ-R tertiary programs opt for the implementation of a blended modality that combines face-to-face and online learning setups for AY 2022-2023. Blended learning is a combination of the traditional face-to-face schooling and modern learning methods using the Adelante Learning Management System (LMS) and videoconferencing tools.

Meanwhile, the Basic Education (Elementary, Junior High School, and Senior High School Departments) adopts a blended learning modality until it transitions to in-person classes, which shall be mandatory by November 2022 in compliance with the Department of Education (DepEd) Order 34, s. 2022.

These initiatives were taken as a response to the needs of the students and our society according to the memo released by the Office of the President. The University’s direction is to move forward to a flexible, student-centered, and 21st-century learning experience for all Josenians while following the government’s mandates. 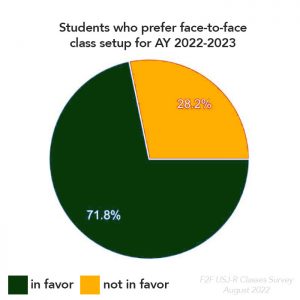 This direction is also grounded on survey data. About 1,500 college students responded to an internal survey. Of that number, over 95% declared that they are fully vaccinated. Over 70% of the respondents said that they prefer to have face-to-face classes as soon as the first semester of this academic year.

“It means that we listen to our students and their needs. It is in the spirit of Synodality or “Walking Together” as a Recoleto community,” said University President Fray Eduardo Celiz Jr., OAR.

Minimum health and safety protocols are still enforced inside the school premises such as wearing of face masks and mandatory temperature checking upon entry. There is no need to show vaccination cards. An orientation series for students, employees, and parents were already conducted in August 2022 to ensure that everyone is onboard. The USJ-R campuses were also inspected by the local government unit to ensure that the University is ready to cater to the needs of the students and demands of the current times.

To recall, former President Rodrigo Duterte issued on March 16, 2020 a proclamation declaring a state of calamity all throughout the country due to Covid-19. In effect, the University temporarily closed its doors which prompted for its employees to work from home and its students to do online classes. After several months, the non-teaching employees started returning to the campus in a skeletal workforce system. Only the back gate was opened when the school conducted limited on-site operations in the third quarter of 2020. It was only on June 6, 2022 that the University opened its main gates for the first time in two years in order to cater those with onsite transactions.

September 12 marked the beginning of a new era where Josenians in all levels are physically back in campus.