After receiving his diploma, ETEEAP graduate John Carlo Barbac bent his knees on stage the Recoletos Coliseum and asked his girlfriend to marry him.

Lanie Mae Marianito, 24, vehemently said “yes”. They have been together as a couple for three years.

With all three conditions met on graduation day, Barbac believed that proposing on stage is the most romantic gesture that he can do for the love of his life. 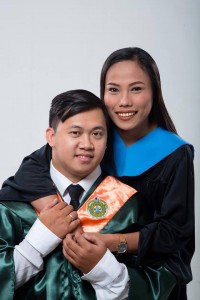 “And that is why sa graduation akong gipili kay I want my special day to be also her special day,” he said.

Barbac and Marianito also took a graduation photo together in commemoration of their achievements.

The two are set to wed in January next year.

“Thank you for staying at my side in every battle that I have faced in my life. Because of you, I never felt that I am alone in this journey and you always encourage me not to give up. I am so blessed to have someone like you,” he expressed to his fiancee.

Moreover, he also thanked the University of San Jose-Recoletos (USJ-R) for enabling him to achieve his dream to be an engineer. He originally finished a short-term program at another educational institution after high school. However, he needed to work right after at a brewery’s laboratory.

Wanting to fulfill his dream to be an engineer, he enrolled in the Expanded Tertiary Education Equivalency and Accreditation(ETEEAP) of USJ-R.

“I checked the background sa mga schools na nag-offer og ETEEAP but only USJR has a good feedback. It is also the best implementer of this program and im so happy that i enrolled in USJR,” Barbac said.

According to the Commission on Higher Education (CHED), ETEEAP is a comprehensive educational assessment program at the tertiary level that recognizes, accredits and gives equivalencies to knowledge, skills, attitudes and values gained by individuals from relevant work. It is implemented through deputized higher education institutions that shall award the appropriate college degree.

ETEEAP beneficiaries must be Filipinos who are at least high school graduates. They must have worked for at least five years in the field or industry related to the academic program they are obtaining an equivalency. Moreover, they must also be able to show proof of proficiency, capability and thorough knowledge in the field applied for equivalency.
In USJ-R, it will only take one year for one to get a diploma through the said equivalency program.

“For aspiring people who want to have a degree, don’t lose hope and don’t let poverty or age be the hindrance on not pursuing your dreams in life,” Barbac added.

The 27-year-old IE graduate is one of the 342 ETEEAP graduates who received their diplomas on April 27.

Here’s a video of Barbac’s proposal taken by the Instructional Media Center.