The dean of the university’s College of Commerce (COC) was awarded two national level awards in the month of November alone. 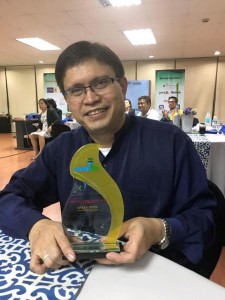 With a big smile, Dr. Edgar Detoya holds the plaque he received.

COC Dean, Dr. Edgar R. Detoya, CPA, said he is grateful to the Philippine Institute of Certified Public Accountants (PICPA) for the honor bestowed on him and to the chapter which he leads.

As stated in the award, the recognition was given for Detoya’s “praiseworthy accomplishments as President of PICPA-Cebu Chapter for the fiscal year 2016-2017”. A day after he received his first award, Detoya received another recognition from PICPA.

He received the “Continuing Excellence Award” for PICPA-Cebu Chapter on account of the Chapter’s outstanding accomplishments during his presidency in terms of professional development activities, membership growth, sound financial management, administrative efficiency, and noteworthy community outreach projects. All of which, according to PICPA, have contributed to the advancement of the accounting profession for the fiscal year 2016-2017.

The second award was given during the 72nd PICPA Annual National Convention at the Philippine International Convention Center (PICC). It was a 3-day convention which was attended by more than 5,000 CPAs from all over the country.