Around 75 members of the Josenian community gathered in a two-day event to discuss the Philippine social realities and church responses on climate change on February 7 and 8.

This is part of the Recoletos Heart Solidarity Campaign, which was first launched in November 2015. This initiative is the “concrete response” of the Order of the Augustinian Recollect (OAR) to the calling of Pope Francis to take better care of the planet and the lives in it.

It is centered on the concept of “Change your life, not the planet.” Three speakers were invited at the University of San Jose-Recoleetos (USJ-R) to talk about actual social action works.

One of which is Vermon Timbas, an awardee of the 2018 Miguel Magalang. It is a climate leadership memorial award under the Climate Reality Project Philippines with a mission to catalyze a global solution to the climate crisis by making urgent action to a necessity across every level of society. He is also one of the 30 young leaders selected by the North American Association for Environmental Educators (NAAEE)

He shared the importance of green living through practical applications like monitoring of power consumption to lower carbon footprint. Moreover, he highlighted the significance of youth empowerment through education so they may be driven to action. The second speaker was Fr. Rene Cabag, CICM who talked about Living the Catholic Social Teaching. He shared the story of “Mang Urot” who initiated a feeding program for the homeless that is driven by volunteers. It later on evolved to other initiatives like providing comfort rooms and a classroom. He stressed the value of being rooted in a social mission as practicing the teachings of Christ.

The third speaker was Environmental Activist Rodney Galicha. He is one of the managers of Climate Reality Project, a non-profit organization involved in education and advocacy related to climate change.  His topic is “Living Our Laudato Si’ Guide.”

Galicha implied that having a strong faith is one but living one’s faith is another. He encouraged the participants to “care for our common home” as what Pope Francis had highlighted in his second encyclical. 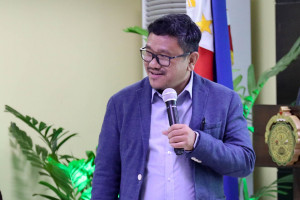 This was followed by a talk by Bro. Raymund Alcedo on how to synchronize the implementation of the said campaign. He encouraged everyone to cooperate as part of the community and apply what the participants learned from the seminar.