Beginning this week, German lessons will be taught for free to Josenians by Filipino-Swiss volunteer Julian Charles Wegmüller.

According to the College of Arts and Sciences (CAS),  he is the first visiting professor to teach German at the University of San Jose-Recoletos. He is in Cebu to spend his summer vacation. In Switzerland, the summer months are from June to September. 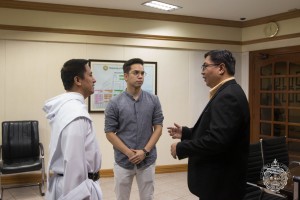 Wegmüller is the son of a Cebuana, who finished her studies in USJ-R. In his 14th time in Cebu, he decided to willingly offer free German Crash Courses to promote the German language. He said that he will teach the basics and important aspects such as starting a conversation, listening and writing and grammar in German.

In partnership with the College of Arts and Sciences(CAS), the program is still in its experimental stage. After its first run, the results will be evaluated.

The International Studies Students are the first ones who will be given the privilege to avail the program. This is in preparation for the implementation of the German Crash Course not just in USJ-R but in other schools as well.

Certificates will be given to the students who will finish the five-week course.

Here is the class schedule:

Wegmüller said that he is excited to teach the students. Furthermore, he’s expecting for the students who are interested in the German language will attend the classes actively.

Interested students are advised to register at the CAS Office on or before July 15.