Six Cebu-based universities collaborated to launch the regional celebration of the International Year of Indigenous Languages (IYIL) as prescribed by the United Nations.

The celebration is expected to strengthen and reinforce the many standard-setting tools adopted by the international community which include specific provisions to promote and protect indigenous languages.

This after a UNESCO report stated that 40% of the estimated 6,700 languages spoken around the world were in danger of disappearing.  The fact that most of these are indigenous languages puts the cultures and knowledge systems to which they belong at risk.

Celebrating IYIL2019 will help promote and protect indigenous languages and improve the lives of those who speak them.  It will contribute to achieving the objectives set out in the United Nations Declaration on the Rights of Indigenous Peoples and the 2030 Agenda on Sustainable Development. 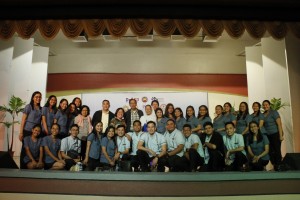 Education students pose with the speakers after the launching of the regional celebration of the International Year of Indigenous Languages.

“Language is dynamic because it changes everything”, said Dr. Ricardo Nolasco, the well-renowned MTBMLE advocate and UP Diliman linguistics professor.

He was the keynote speaker of the launching event. He added that communication plays an envitable role in any institution because it is a powerful way to attain more effective organization in the community and the country as a whole.

The committee of IYIL Region VII will be announcing the events that will help compose the numerous ways of promoting the indigenous languages in the region through social media.