On its third run, the reach of the Recoletos Research Congress (RRC) has extended farther compared when it first started in 2017.

Two-hundred entries were received this year. There were also researchers from 78 schools in India, USA, Vietnam, Taiwan, Singapore, and Philippines who took part in the said intellectual gathering. A total of 171 participants gathered.

University President Rev. Fr. Cristopher Maspara, OAR mentioned in his welcome address that the first Recoletos Research Congress was the response of the Center for Policy, Research, and Development Studies (CPDRS) to the administration’s call for a research congress that embodies the unique Tatak Rekoleto. He added that the RRC has become an annual event that grew more encompassing since its launch. 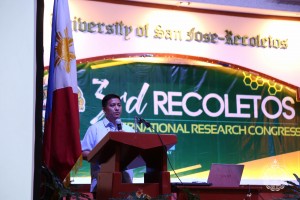 University President Rev. Fr. Cristopher Maspara commends how the Recoletos Research Congress have extended its reach to the international community on its third run.

The first run was participated by Josenians researchers only. On its second year, the convention was dubbed “Recoletos National Research Congress” which saw researchers from all over the Philippines take part in the discussions. Now on its third installment, the congress further extended its reach internationally.

The three-day Recoletos International Research Congress was held on March 4 to 6. Its theme was “Multidisciplinary Research Towards Sustainable Development.” This was aimed to put emphasis on the significance of synergy in research to attain sustainability.

According to Fr. Maspara, it ensures a more global coverage of the different research areas and a wider dissemination of scholarly works.

“I believe this congress can be an important avenue to share interdisciplinary and multidisciplinary perspectives that have societal and global impact,” he added.

He also encouraged the globally diverse attendees to engage in intellectual discourses about the importance of research and scientific inquiry in achieving the United Nations’ Sustainable Development Goals by 2030.

For this year, the congress catered both professional and student researches. It has 15 categories such as Creativity and Recreation, Gender and Generation, Law and Justice, Well-being and Health, and Enquiry and Learning to name a few. 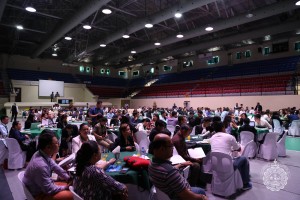 Participants listen to keynote speakers at the Recoletos Coliseum.

The keynote speaker for the event was Dr. Napoleon Juanillo, the advisor of the Department of Trade and Industry (DTI) on Innovation and Entrepreneurship. He talked about shaping the intellectual capital of universities amidst the Industry 4.0. He further underlined the significance of intangible assets such as workers’ knowledge, patents, copyrights, brands, and experiences to a company or an institution.

“Intellectual Capital is the currency of the new millennium, the key to success in the era of knowledge, and a cornerstone to the dynamic process of knowledge production, translation, value creation, and innovation,” he said.

Juanillo also reiterated the importance of innovation in relation to a company’s growth or an enterprise’s competitive ability. Innovation, he said, is the mechanism behind competitive intelligence and competitive advantage.

Dr. Isagani Padolina, Director of Research and Development, and Quality Assurance and Business Development of Pascual Pharma Corporation, was the opening ceremony’s plenary speaker. His topic was about Translational Research and Industry Linkage. He reiterated the need for a change in attitude, approach and culture to obtain the status of a research-based university and a knowledge-based nation.

“Whatever we are doing right now – the status quo, is not enough,” he remarked. Each research presenter discussed his or her study during the plenary sessions.

Padolina said iteration between the problem and the solution is hazed in Industry 4.0. This resulted to the need to go faster from problem solving to arriving at a solution in order to ensure success.

His talked was followed with a prerecorded video message from Rev. Fr. Antonio Carron, OAR, General Secretariat for Education of the Order of Augustinian Recollects. He was not able to attend the congress due to prior commitments. He encouraged the participants to educate through the OAR way which is by means of education both mind and heart.

After the opening ceremonies and a quick lunch, the break out sessions took place at the 4th and 5th floors of the La Salud Building. Research papers were presented followed by an open forum wherein the presenters answered queries from the audience facilitating a fruitful intellectual encounter.

One participant garnered the attention of other delegates due to his young age.

He was Dashell Sean R. Villanueva a Grade 6 student from Marian High in Kalibo, Aklan. He awed the audience with how he successfully presented his study entitled “Growth Promoting Property of Cucurbita maxima agar; A Media for Lactobacillus casei” with seemingly relative ease. Villanueva received the Special Commendation for Exemplary Presentation. He serves as an inspiration to all other young researchers to start early in the field of research. 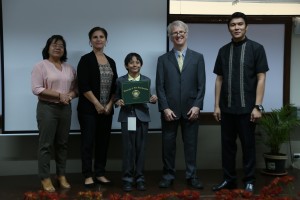 Grade 6 student Dashell Sean Villanueva from Marian High in Kalibo, Aklan receives his Special Commendation for Exemplary Presentation. He is the youngest presenter in the history of RIRC.

Dr. Darryl Raymund Johnson Macer, President of the American University of Sovereign Nations, gave his plenary talk to the participants on the third and last day of the event. He discussed about the true meaning of research and its impacts on the progress of society. He also elaborated on how to play the publication game nowadays.

On the other hand, Taraji Belgacim talked about how to maintain the relevance of research for a more global future. Belgacim is the Lead English Instructor of Seattle College in Washington and a visiting professor. She expounded on how taking risks helps keep researches pertinent to the world.

To keep  the participants enthralled during both the opening and closing ceremonies, the Adelante Dramatics and Cultural Ensemble (ADRAC) entertained them with their fascinating performances that showcased Filipino culture.

The best papers of the different categories are listed below:

Some participants also joined the city tour prepared by the organizers after the closing ceremony. The tour let them see the rich culture and history of the Queen City of the South.
After the awarding of winners, the organizers announced the call for papers for the 4th Recoletos International Research Congress in 2020.