A couple in the University of San Jose-Recoletos (USJ-R) tries to prove that young romantic love, if put on the right priority rank, is not a hindrance to reach the zenith of academic success.

The former is a BA Communication student while the latter is an AB Liberal Arts and Commerce (LIACOM). Both are expected to graduate this March.

The two first met in their high school years. Pedrosa, like many Filipino teenage girls, was prohibited to enter into a romantic relationship back then.

The two were introduced to each other by common friends. They were in their first-year as high school students.

When they shook hands, Pedrosa said that she experienced the famed “slow-mo” moment. Meanwhile, Kenneth said he fell on ‘first spark’.

“Our romance began with a spark. I feel like our love story started as a mutual calling for both of us. I found her. She found me,” he said.

The Day 01 encounter sparked a daily routine of conversations and moments with each other. They learned more about each other and became good friends. Inevitably, both started to fall in love.

However, just like every girl at her age, Pedrosa’s family wanted her to focus on her studies and finish high school first. She was not permitted to have a boyfriend until her high school graduation.

Torres had to wait for four years before Pedrosa can meet the conditions set by her parents. 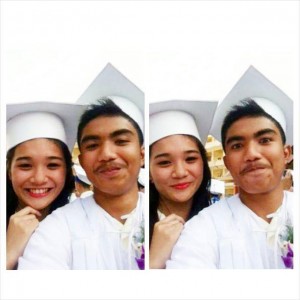 Throughout the duration of their high school years, there was no label. They said that they were not a couple but they were more than friends.

Even so, their label was never an issue to them. They say that the key to this was communication and trust. Communication through message exchange after school and making agreements instead of rules.

Four years later, the two finished high school with flying colors in 2015. Torres knew what to do next －make them official.

No grand gesture, no fancy set up, just a question and five vows to show his sincerity. Torres promised to prioritize their studies over their relationship, to remind each other everyday to stay healthy, to listen and obey each other and their parents, to respect one another, and lastly, to make God the center of their relationship.

On that same day, Pedrosa gave him her momentous “yes.”

She believed that Torres could be he one with whom she will spend her life with, after praying and lighting a candle on a daily basis at St. Joseph The Worker Parish in Talisay City. Pedrosa said she was inspired by her mother who used to do the same gesture and prayed for a good husband like how Joseph is to Mary.

Three years later, their relationship is still going strong and they are on their way to four years of togetherness. (Well, it’s eight years if their high school years are included.)

When asked what the secrets behind staying together for that long, Torres said there is no secret but there are “things one must learn and try to understand to have a long and lasting relationship.” 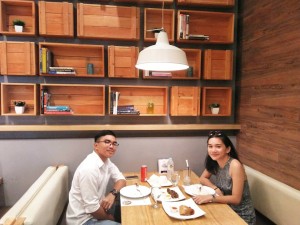 Shayne and Kenneth snaps a photo in one of their typical date nights.

He gave a list of five things to ponder on to keep one’s relationship away from toxicity:

According to Pedrosa, the both of them have already mastered the art of understanding and respecting each other’s time. She highlighted that a couple must understand that there has to be time for something else and not all of their time is to be spent for each other alone.

“[There has to be] time for himself, for his friends, for his sport, and for his family. Though we are balancing our academics plus extra-curricular activities and our relationship, we still make sure that we know our priorities and the importance of urgency,” she said.

When asked about misunderstanding, both agreed that it is inevitable especially because they both have strong personalities and different beliefs which sometimes collide. Open communication, they said, is the way to deal with it.

Heading on their fourth year as a couple, the two decided to enter another new chapter. 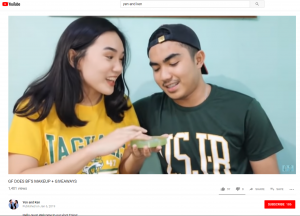 A screenshot of the first YouTube video which the two uploaded on their channel.

Last month, the two created their YouTube channel where they share their video blogs together. The decision came from a spontaneous conversation while riding a bus on their way home.

Other than their YT channel, both are looking forward to graduating with honors this March 2019.

After college, they are gearing to enter the chapter of their relationship as working individuals. They are anticipating that they will have to adjust again but they are sure they would do so without a hitch.

As a message to fellow college students who are also striving hard for the acquisition of their goals, the couple says that one needs perseverance, inspiration, and faith to keep them moving forward every day.

Torres and Pedrosa are a proof that romantic love, when put in the right order on the priority list, would not hinder a student from excelling in the academe and that some high school love stories do last long.