#USJRSHSAdvocates4Peace – This is the hashtag which the Senior High School(SHS)  came up with as a response to the social issues faced by the modern world.

SHS Principal Nila N. Garcia received an email last July 14, 2017 from the Catholic Educational Association of the Philippines (CEAP) through its National Advocacy Council mandating all its member schools to observe a 14-day novena for peace. This is CEAP’s response to the different social issues like the war on drugs, death penalty and the ongoing war in Marawi which threatened the value of life.

As a response, the SHS department created a revolution in today’s social media through the use of a hashtag (#) which encouraged students to post about their perceptions on peace. It started on the last week of July.

HUMSS Cluster Head Herben M. Tautho said he was not surprised when the hashtag became widely used by Josenians, their family, and even their friends on social media. Furthermore, he explained that the objective of the cause which is to use social media to something productive.

He continued saying millenials are more active in the social media. With that in mind, Tautho believes that a hashtag is an avenue on social media which can be utilized for a greater cause.

Moreover, the advocacy for peace is integrated in the lessons of HUMSS subjects such as in Understanding Culture, Society and Politics (UCSP), Philosophy, Personal Development, and 21st Century Literature, and in the Christian Life Formation (CLF). The Peace Initiatives has 3 paths: Path 1 – Call for Prayer; Path 2 – Call for Peace Talks or Conversations; Path 3 – Call for Acts of Charity.

Bookmarks about peace made by students were distributed in malls and other public areas. There was also an exhibit that features the different outputs of students such as posters and slogans that advocate peace.

Aside from that, HUMSS cluster also integrated peace talks or conversations in Understanding Culture, Society and Politics classes. This is the second path which was taken by senior high school students.

Senior high students also presented their original composition and rendition of Kantabokasiya in the 21st Century Literature subject.  The subjects Philosophy and Understanding Culture, Society and Politics led the social advocacy campaign for peace on Facebook using the aforementioned hashtag.

The department has also initiated the peace advocacy button pins which were distributed to all students, teachers and staff. It was designed by John Michael Olaybar, a HUMSS Grade 12 student.

There was also a seminar on the peace situation in Marawi by Politics and Governance subject last August 25 and peace forum last September 11 by the HUMSS cluster with the theme “Bridging Gaps Towards Peace through Multi-Sectoral Perspectives”. Lastly, the Path 3 – Call for Acts of Charity is led by the COP anchors in which donations of any kind for Marawi residents are greatly welcomed. 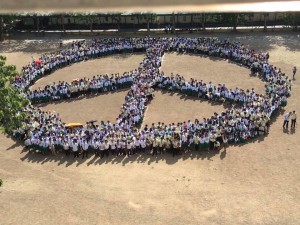 FOR PEACE. Senior high students and teachers of the University of San Jose – Recoletos made a human formation of the world peace sign

To culminate the series of activities promoting peace, the entire Senior High School department assembled in the school grounds and danced to Michael Jackson’s legendary song “Heal the World” forming the symbol of peace.

“I am thankful for the cooperation of the students especially that we only practiced in a short period of time. Dili biya lalim magbarog sa init [It is not easy to stand under the heat of the sun]. It was almost perfect; I had goosebumps while watching them dance,” she said.

It was a combined effort of the PE and Health, CLF, HUMSS and LMC-English clusters.

Garcia delivered a message of peace and thereafter led the ribbon-cutting of the gallery of artworks dedicated to influence peace. She reiterated that the advocacy for peace does not end with the celebration and that we are free to still use the hashtag #USJRSHSAdvocates4Peace to unite us as one Josenian community.

She continued that the department’s advocacy is not only the institution’s calling, but it is also the advocacy of seven billion people in the world.  The call for peace will not stop until peace itself is attained.