Josenian is the first Cebuana recipient of GMA Excellence Award 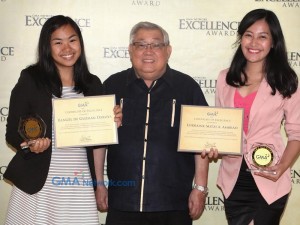 The GMA Network Excellence Award is an annual national search for graduating students of Mass Communications, Multimedia Arts, Advertising, Electronics and Communications Engineering (ECE), Computer Science, Computer Engineering and Information Technology who have excelled not only academically but have also contributed to socio-civic causes in their communities.

During her collegiate years, she has been actively producing articles, documentaries, a research paper, and short films. She has also volunteered in numerous community programs and is one of the founders for Project Kadasig in Barangay Kamagayan.

“Those who received aid through the project are now helping others. We have created and continuously create a chain of goodness in our corner of the world for humanity,” she added.

Ambrad is now working for a local newspaper in Cebu but dreams of eventually venturing into making documentaries like the award-winning ones produced by one of her idols, GMA News pillar Howie Severino and Kara David.

“This will not only serve as an inspiration to those who hear my story but also to members of my family. Limited resources should not stop us from excelling in the things we do, the things we love, and the things we are passionate about,” she said in an interview with GMA news.

—with reports from GMA news online